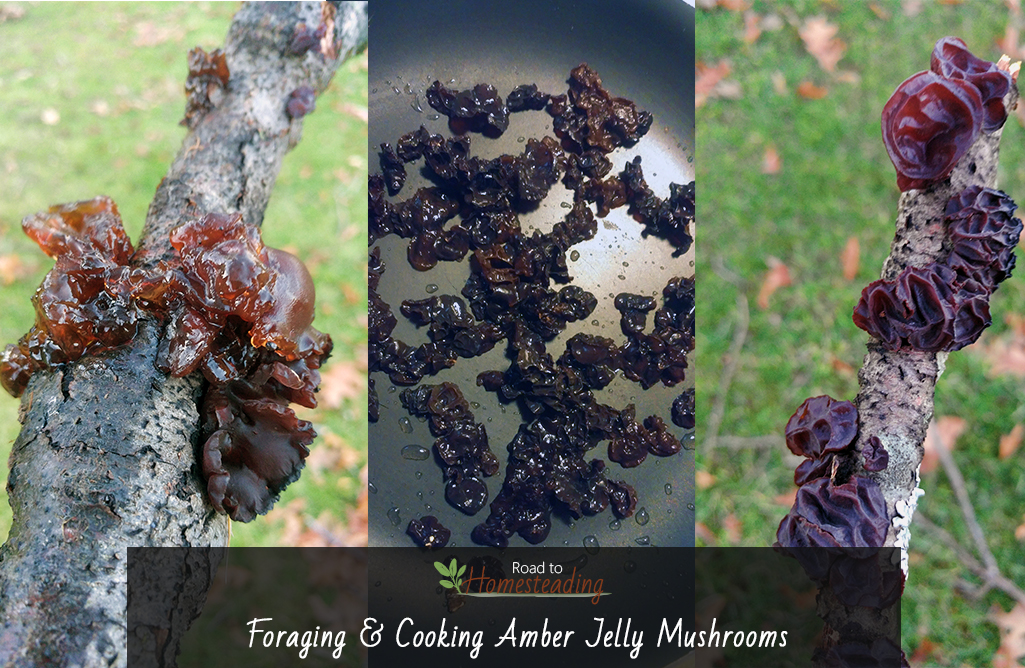 **Disclaimer: Before eating any wild mushroom (or any new foraged item) check guides, spore print on species with look-a-likes, and be 100% certain of what you are eating. If you are at all unsure, do not eat it. As with any new food, be on the look-out for allergic reactions. Try a small amount the first time through. Allergic reactions can happen, even if something is known to be edible. **

It was a cool and cloudy afternoon when my friend Bob, his oldest daughter and I set off deep into the forest in search of the elusive amber jelly roll mushroom (Exida recisa). Armed with field guides, we began our search.

Okay, okay – so maybe it was more Bob’s yard at the homestead than a forest, and maybe it only took us a few minutes to wander over by an old oak tree in his yard, but you get the idea.

We found a mess of what appeared to be amber jelly roll mushrooms on fallen branches beneath an old oak tree. We consulted the Field Guide to Wild Mushrooms of Pennsylvania and the Mid-Atlantic to confirm identification, but it was not listed in this guide. When foraging for mushrooms it is imperative to confirm identification. There is no room for error even if the mushroom is distinctive and easy to ID, which is why we brought a second field guide to the party – Mushrooms of the Northeastern United States and Eastern Canada. Here we found the amber jelly mushroom listed and could check off the identifying characteristics:

It fit the bill. Mushrooms of the Northeastern United States and Eastern Canada describes the amber jelly roll mushroom as a small (1-4 cm wide) yellowish-brown, reddish-brown to purple colored mushroom with a somewhat gelatinous texture. It is known to grow in clusters on hardwood branches and sticks. Even though this mushroom did not show up in the Field Guide to Wild Mushrooms of Pennsylvania and the Mid-Atlantic, they seem to be fairly common in Southwestern Pennsylvania. I have seen them many times on hikes throughout the state.

At first glance, the amber jelly roll does look like something you’d want to eat, but this species is edible, like many of the jelly mushrooms. You’ll often find other jelly mushrooms used in Asian cuisine (think soups). Neither Bob or I had tried eating this odd-looking mushroom before, but that was changing today.
We gathered a few handfuls of fungi and carried them back to the house. We soaked them in water and rinsed them clean to remove any bugs or debris. We tasted the fresh mushroom. It was less than exciting – rather bland with a texture on the rubbery side.

We sautéed the mushrooms for about 15 minutes, with some Asian inspired flavors, and we decided to add them to the venison meatballs with homemade sauce and noodles Bob was making for dinner. The blandness of the mushroom worked in its favor, and absorbed the flavors we sautéed them in. The mushroom still retained some of its rubbery texture.

I was really indifferent to the mushrooms raw flavor; though it did hold the added flavors we cooked them in. I really didn’t care much for the texture of the mushroom, but would likely give it another try the future, may be added to a soup or broth which might allow the texture to be less rubbery.

This post may contain affiliate links. If you purchase through these links, your cost is the same while our family receives a small commission. Thanks!

Some new #teaseeds came in the mail today! From th

Finally made a castile soap bar. Scented with lemo

A cold morning at the river checking traps for an

Another bloom from one of my #teaplants Cultivar "